The facility at PFLC consists of two buildings, three parking lots, and a cemetery. The lower building is the Christian Center (CC), used at various times as a worship space, a gym, a classroom, or a meeting space. With its industrial kitchen, the CC is also used for the annual lutefisk dinner, the community Thanksgiving dinner, and various other meals throughout the year. The upper building consists of the sanctuary built in 1906 but expanded and remodeled in 1959, an addition on the east end, and an addition to the north.  The east addition provided for Sunday School classrooms, a nursery, and a small sitting room. The north addition provided for offices, a library, a social hall and kitchen, more Sunday School classrooms, and two medium-sized rooms put to multiple purposes throughout the week.

A group of people meet weekly to take care of ongoing maintenance of the facility.  Calling themselves the Monday Morning Ministry (MMM), they work hard each week to keep the building usable and comfortable for all.  The MMM recognize the potential of the building as a service opportunity in the community, a draw for tourists and genealogy searchers, and a picturesque part of downtown and historic Poulsbo. 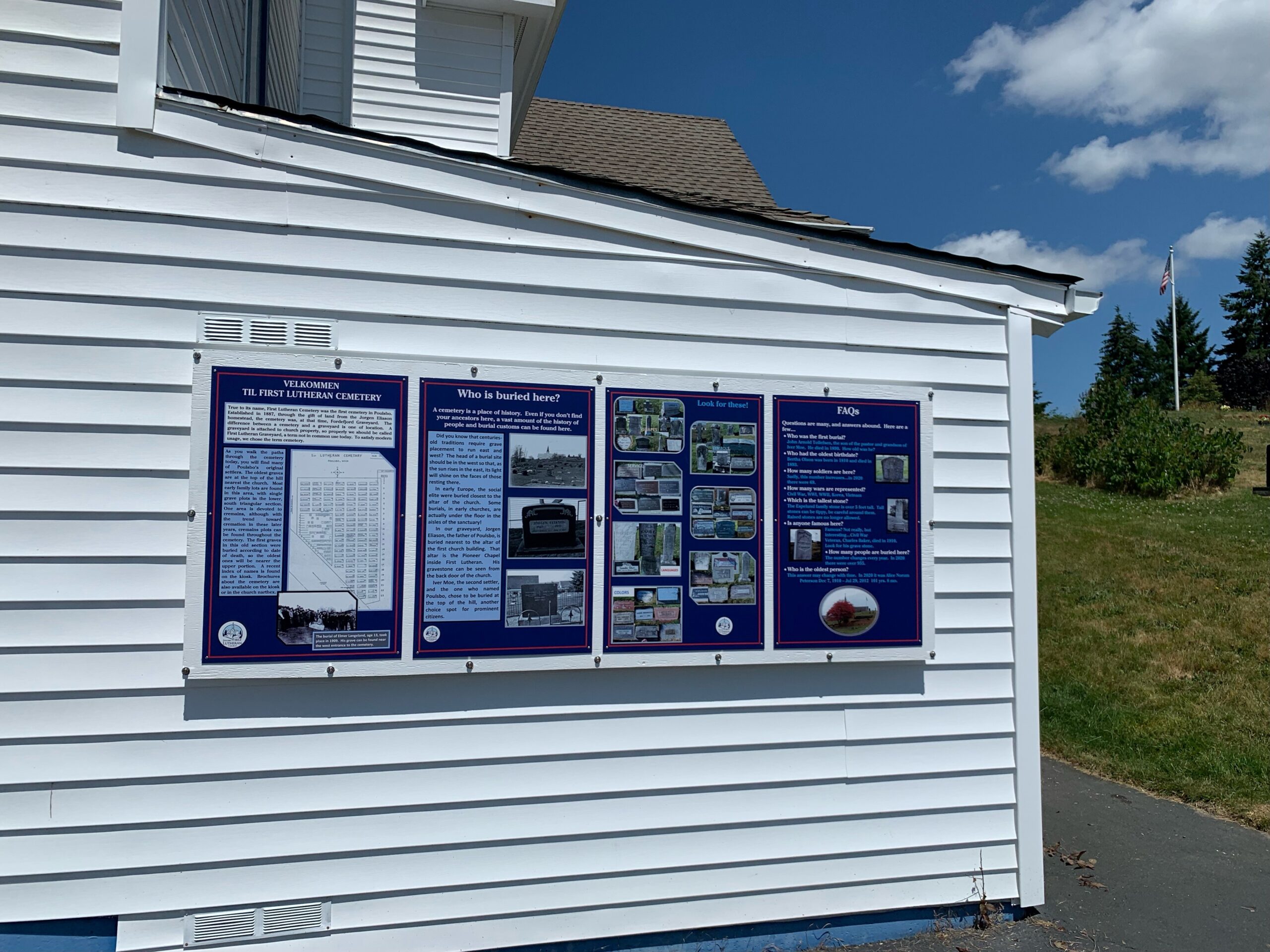 The cemetery was established before the church building was built. A walk among the headstones provides a glimpse into Poulsbo’s history, from the 19th century to today. Find-a-Grave has a catalog of all the headstones in the PFLC cemetery. These signs by the west entrance to the cemetery just outside the church building provide historic information about people and graves and lives lived since the late 1800s.

Please note: Because Jesus calls us to tend to the most vulnerable, please note that, for the health of your neighbor as for your own, masks (still one of our best defenses against Covid and other viruses) are encouraged in all PFLC buildings, and vaccinations, though not required, are understood to be God's hand of healing for your sake and the sake of the world.

Lutheran World Relief (LWR) is responding to the ongoing crisis in Ukraine. To help, you can make one-time or ongoing donations at donate.lwr.org/give. You can learn more about the work of LWR at lwr.org.

Lutheran Immigration and Refugee Service (LIRS) is responding to the refugees fleeing Afghanistan by supporting the organizations in neighboring countries caring for the refugees. If you feel called by Jesus to help, go to LIRS.org and click the "donate" button. Your donation is tax deductible.

Lutheran Disaster Response (LDR) is currently responding to at least 12 emergencies around the globe, including Hurricane Fiona and flooding from remnants of Typhoon Merbok. Go to ELCA Disaster Response to learn more about the ELCA's helpful hands in these emergencies and to donate. If you donate to a specific emergency, 100% of your donation will go to onsite help, with administration costs covered by our regular offerings.

Fredericksen Wilderness Park is now OPEN!
Please remember to drive slowly when entering and exiting the park, since the drive belongs to our neighbor. The gate will be locked at sundown, and there is no entry after that time. As always –if you pack it in, pack it out! Enjoy!

Funeral Planning worksheet
You can ease some of the burden on your loved ones by planning ahead. Click here for a resource worksheet on planning your own funeral.

8:30am – worship livestream available at pflc.org/live-worship or PFLC on Facebook

8:30 and 11am – worship in the sanctuary.
Holy Communion offered to EVERYONE every week

Children are encouraged in worship!